Filming a future American city in Shanghai for quirky romance Her

Filmmaker Spike Jonze spent a week filming on location in the Chinese city of Shanghai for his future romance Her. The film tells the story of a lonely writer who falls in love with an artificially-intelligent operating system and Jonze was inspired by Shanghai’s futuristic feel. 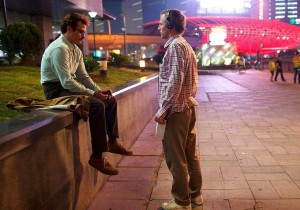 “They singled out Shanghai as a location themselves,” explains Michael McDermott of servicing company Gung-Ho Films: “But I think once we gave them some more ideas they were very, very happy with what the city could do for the film.

“[Jonze] told me that 60% of the film's look comes from Shanghai. It played a very important role, even in disguise so to speak. We never shot any landmarks so you wouldn't easily identify it as Shanghai.

“They loved the elevated walkways of Shanghai. Characters could walk along these walkways and the camera would never see the street and cars below. When you watch the movie you will notice there are no cars. KK Barrett the Production Designer said that futuristic cars would take your attention away from the story so they deliberately didn't shoot any cars I think except for one taxi scene."

It's boundless ambition that sometimes produces the coolest and most ultra-modern spaces that are great for filming.

“From these walkways a very modern city is totally visible as well, no matter which direction you point the camera,” McDermott adds.

The production team filmed a blind date scene in a former avant garde restaurant that had been abandoned through lack of business, while some of the city’s elevated roads have shell-like structures (pictured above) that change colour in a fashion that was ideal for the non-specific future setting of Her. 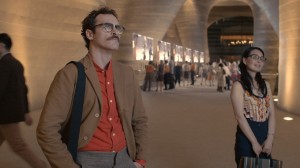 For another scene they used the distinctive ‘elephant leg’ buttresses of a gallery (left) that was nestled between a luxury hotel and a shopping centre.

“The Chinese developer was very hip and into culture which is why we were told he built this space,” McDermott recalls: “I love how some real estate developers here in China don't have any fear of doing something completely risky pushing the boundaries and doing something never done before. [It’s] boundless ambition that sometimes produces the coolest and most ultra-modern spaces that are great for filming.”