Historical action drama Pompeii recreated the eponymous ancient Roman city filming on location in Toronto, Canada. The film tells the story of a slave-turned-gladiator struggling to save the aristocratic woman he loves against the backdrop of Pompeii's infamous volcanic eruption. 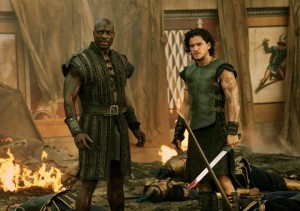 Filming was based at Cinespace Film Studios on Kipling Avenue in Toronto, where the production team constructed an amphitheatre and used a large green-screen facility for a chariot race stunt set-piece.

“There were no builds per se on location,” said producer Don Carmody: “We did erect a Roman legion encampment. Basically we went on location for the fields and streams of the area surrounding Pompeii.

"We did construct a number of sets on the back lot of Cinespace - mainly the amphitheatre, the city gates and the Londinium Arena for the opening fight, as well as several smaller sections of the harbour at Pompeii.”

Pompeii is the latest in a wave of historic action dramas popularised by the success of Zack Snyder’s super-stylised Spartan drama 300 in 2006 and Louis Letterier’s gritty 2010 remake of Clash of the Titans, both of which showed there was an enduring audience appetite for historic dramas after the Oscar-winning success of Gladiator in 1999. On the small-screen, Game of Thrones and Spartacus: Blood and Sand have both found large audiences.

We went on location for the fields and streams of the area surrounding Pompeii. We did construct a number of sets on the back lot of Cinespace.

Eastern Europe has been the more common choice of filming location for historic epics in recent years. A long-gestating sequel to 300 entitled 300: Rise of an Empire filmed at Nu Boyana Film Studios in Bulgaria, as did a remake of Conan the Barbarian and The Legend of Hercules, while Brett Ratner’s rival feature Hercules based itself in Budapest. 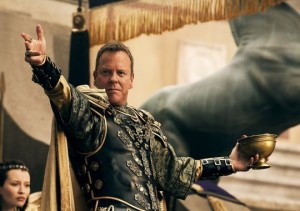 Nu Boyana offers a large ancient-Roman standing set that can be easily adapted for specific periods and has even been used for a Roman-set sitcom called Plebs made for British broadcaster ITV. The studio is owned by Nu Image and Millennium Films, which produced two of the above titles, and Bulgaria’s local production costs undercut much of the European competition making the local economics more appealing.

Ridley Scott will provide another of this year’s big-budget historical features with his biblical epic Exodus, which has filmed on location in the UK and in Spain. On television, Halle Berry is producing a miniseries based on the life of legendary Carthaginian general Hannibal Barca and Netflix is working with The Weinstein Company on a new miniseries inspired by the life of Marco Polo.