Filmmaker Spike Jonze combined cityscapes in Los Angeles and Shanghai to create the near-future urban setting of his oddball romance Her. The film follows a lonely writer who develops a strange relationship with an artificially intelligent operating system. 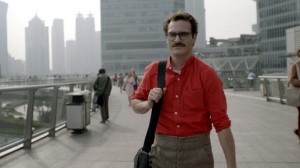 Jonze worked with production designer KK Barrett to help create the world of the movie and the shoot ended up amalgamating elements of Los Angeles and Shanghai, with servicing in the Chinese city from Gung-Ho Films.

“In Shanghai in Pudong they have these elevated walkways so you can go from building to building without ever having to cross an intersection,” Barrett told the New York Times: “Already, that gave us a bit of a future slant, feeling like we’re comfortable pedestrians within the urban grid.”

China is becoming more popular as an international filming location, although generally for big-budget event movies looking to bypass the country’s strict quota on the number of international films screened each year. Michael Bay’s action sequel Transformers: Age of Extinction filmed scenes in Hong Kong and elsewhere in the country with a view to getting broader theatrical distribution in the country and maximising box-office when it’s released.

In Shanghai in Pudong they have these elevated walkways so you can go from building to building without ever having to cross an intersection.

In recent years California has appealed mainly to productions with lower budgets, as the state’s formal filming incentive programme is allocated using a lottery system and doesn’t support big-budget shoots.

Filmmaker JJ Abrams covered additional costs himself to film Star Trek Into Darkness in California and Marvel’s Captain America: The Winter Soldier is among the only other big-budget shoots to have filmed extensively in the state in the last few years.