In March 2014 the BBC is screening a new series of drama Shetland, named for the remote archipelago north of the Scottish mainland where it's filmed and set. Douglas Henshall stars as a detective working in the small island communities. 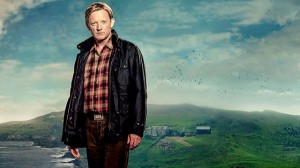 “I think it’s incredibly accurate [as a show],” said series co-star and former islander Steven Robertson in comments to Radio Times: “The camera doesn’t lie - those exterior scenes are the Shetland Islands themselves. Some people may think of Shetland as a backwater, but the series shows viewers that there’s a lot going on and they should go and visit - it’s such a photogenic place.”

Part of the shoot involved filming scenes on the remote Fair Isle, which has a population of just 65 and proved a logistical challenge to get to.

“It’s nearly a three-hour ferry ride from Shetland, so we flew there on an eight-seat plane and landed on a big square, like a football pitch,” Henshall told the outlet: “We couldn’t take any vehicles with us and we were a skeleton crew because there are very few places to stay. However, the people were fantastic - they lent us their houses and cars so that we could get around.”

Some people may think of Shetland as a backwater, but the series shows viewers that there’s a lot going on and they should go and visit - it’s such a photogenic place.

The first series of Shetland was a big success for the BBC, drawing an audience of six million for the first episode.

Shetland is also occasionally used for commercial productions and last year hosted a shoot for mobile network Three that starred a dancing Shetland pony. The spot was a viral hit, racking up more than eight million hits on YouTube.

To find out more about Shetland as a filming location click here.