Park Pictures in London created a Prohibition-era US city in Johannesburg, South Africa, for a new spot for Dulux. Colour Love Story presents a period city where colour is banned, but when a truckload of paint crashes in the street, couples throughout the city bond over a bit of home decorating. 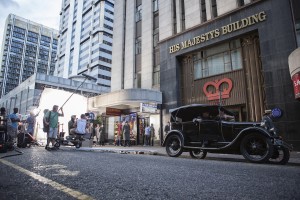 Filming took place in Johannesburg as the city offered the right blend of period architecture and favourable weather conditions for a shoot in the weeks before Christmas. The city that appears in the finished spot is technically non-specific, although it’s essentially either New York or Chicago of the Prohibition era.

“Buenos Aires got mentioned as an option,” explains Park Pictures Executive Producer Stephen Brierley, “but it was doubtful that you could get business district street closures on the scale that was available in South Africa. In Johannesburg we could easily shut down several city blocks and we had art deco buildings that were appropriate to the 1920s setting.

“Johannesburg actually has lots of vacant buildings at the heart of the business district, which made things a lot easier.”

There is a huge amount of vintage dressing available in South Africa, though these items aren't typically available for rent - they aren't sitting at prop rental companies!

Vacant buildings were nestled between occupied office spaces in the city centre and arranging filming permissions with different development consortiums became a challenge, although filming at the weekend made the actual shoot easier.

Period vehicles and weapons for the opening police chase were sourced locally and police uniforms were flown in from Los Angeles.

“There is a huge amount of vintage dressing available in South Africa, though these items aren't typically available for rent - they aren't sitting at prop rental companies!” comments Clare van Zyl of service company Monkey Films.

“The art department trawled through junk shops and private collections to source the dressing. Vintage cars were sourced from the numerous vintage car enthusiasts in the country and the 34 vehicles were co-ordinated by Iain McGreer, owner of Global Vehicle Sourcing Agency." 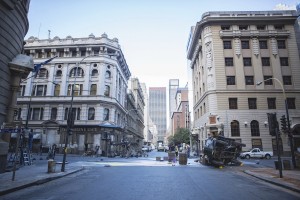 Adds BBH Producer Georgina Kent: “All road markings and modern street furniture had to be changed or disguised and the street scenes had to be propped for the era. The interiors we used were empty shells when we arrived but after Richard [Lasalle, the Production Designer] got his hands on them it was as if we had all been transported back to the 1920s!”

Weather was a minor issue – Johannesburg has an almost tropical climate and the set was threatened by storms in the early evenings – but one of the bigger challenges was that Nelson Mandela died during the shoot. This led to extra time being added to the schedule as South Africa mourned his loss.

“First and foremost we needed to let the country grieve,” Kent adds, “so that meant taking things one day at a time while subtly in the background we were trying to work out what our plan was.

“Pushing the shoot post-Christmas was not an option. Park Pictures, who were already on the ground at this time and Monkey, our local service company, were instrumental in helping us minimise the impact to the client and production as a whole.

"It was naturally a sad time but we all felt extremely honoured and humbled to be able to witness first-hand the celebration of Nelson Mandela's extraordinary life and legacy."