Smuggler filmed in and around London for a celebration of British movie villains in a new Jaguar campaign. Oscar-winning filmmaker Tom Hooper directed British actors Ben Kingsley, Mark Strong and Tom Hiddleston, all of whom have experience playing suave villains on the big screen.

Rendezvous features the three stars ruminating on the appeal of the British villain in American cinema as they make their way to an arranged luxury estate meeting in central London, travelling by private jet, helicopter and the Jaguar F-TYPE Coupe. 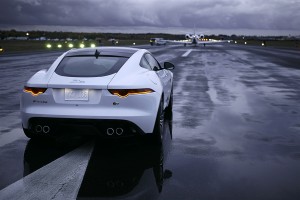 City Airport in East London was originally planned as the filming location for the opening scene where Mark Strong arrives by private jet and steps into his waiting Jaguar. However, a combination of air traffic regulations, security and issues with low-flying helicopters made the team realise they needed a more flexible option.

“The challenges with the airport location,” explains Location Manager Humphrey Milles, “were getting the uninterrupted time we needed on a runway with a good surface, modern and working perimeter landing lights, at an airfield that allowed helicopter movement and could land the jet we wanted to land.

“Other issues were getting a large-scale film unit of more than a hundred and all the essential technical trucks airside and through airport security quickly and efficiently, and working out how we could get both the helicopter and jet landing shots there at night when nearly all airfields have 9pm curfews on aircraft movement. We had a lot to shoot with very little night time to shoot it."

The challenges with the airport location were getting the uninterrupted time we needed on a runway with a good surface and modern and working perimeter landing lights.

“We decided to take that part of the shoot down to Blackbushe Airport in Hampshire," Milles adds, "which gave us much more flexibility and a lot more time for all the essential lighting prep, rehearsals and shoot. So we shot the jet landing and the low-flying helicopter chasing the car along the runway down at Blackbushe.”

Although City Airport was no longer a filming location, Hooper nevertheless wanted to keep the real road route from the airport to The Mall. The production filmed Strong’s drive through central London with a Russian Arm camera car and two helicopters. Closing the roads completely “was never an option”, but a team from the Met Police Film Unit and Transport for London helped out and filming took place late at night to minimise road traffic.

“The roads we took passed Canary Wharf along Aspen Way,” Milles recalls, “through the Limehouse Link, past Tower Hill, upper Thames Street, The Victoria Embankment passing The London Eye and The Houses of Parliament, then up Whitehall and through Admiralty Arch onto The Mall heading towards Buckingham Palace with multiple camera positions along the way.”

Hooper picked The Queen’s House in Greenwich for the villain’s lair where the three actors finally assemble.

“Tom loved the look of the building which could easily be one of the grand former royal residences along the Mall,” Milles considers, “and logistically it meant we had the area to land our two helicopters in front of the building, which most of the other mansions in London didn't.”

With the right planning we got the job done efficiently and in the end the shoot generated a lot more interest than upset - which is always a good thing!

A second-unit team captured the array of CCTV footage that screens on monitors and on the walls as Kingsley waits for his villain counterparts to arrive. This required camera positions all along the driving route from the airport, with careful co-ordination to capture all the necessary shots.

“With the right planning we got the job done efficiently,” Milles concludes, “and in the end the shoot generated a lot more interest than upset - which is always a good thing!”