Scarlett Johansson and filmmaker Jonathan Glazer shot on location in Scotland for new alien drama Under the Skin. Based on a novel by Michel Faber, the broad story follows Johansson’s sinister extraterrestrial as she assumes human form and preys on lonely hitchhikers. 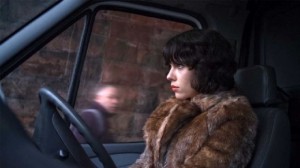 Glazer took a guerrilla approach to the shoot, keeping the production mobile and filming openly on the streets of Glasgow and in the Highlands.

“You can make a choice to create a movie set and have all the paraphernalia that comes with that,” the director told the Scotsman, “or you can film it in a way that we thought was much more thoughtful and pertinent – which was to witness it and put her in the world as it was.

“Having Scarlett in disguise in Scotland… she’s almost like an exotic insect who finds herself on the wrong continent. All of that is fuel for the character.”

Under the Skin was one of a series of high-profile features shot in Glasgow in 2011. Brad Pitt’s zombie drama World War Z turned the city into Philadelphia, while the sci-fi epic Cloud Atlas doubled it for 1970s San Francisco. These productions contributed to local production spending of just over GBP20 million and this figure fell only slightly in 2013.

2013 was yet another successful year for the film and broadcast industry in Glasgow. The economic importance of the sector has been clear for some time.

Bailie Liz Cameron, Executive Member for Jobs and the Economy at Glasgow City Council, commented: “2013 was yet another successful year for the film and broadcast industry in Glasgow. The economic importance of the sector has been clear for some time, with almost GBP250 million having come to the city over the past 15 years. These figures once again illustrate the value of the work of our Glasgow Film Office.”

Glazer is best known as a commercials director, with iconic campaigns for Guinness among his striking back-catalogue.