Michael Fassbender is filming a new adaptation of Macbeth at Bamburgh Castle in Northumberland, northern England. The castle has a history as a film-friendly location for both film and TV, and the new film will also feature Marion Cotillard as Lady Macbeth. 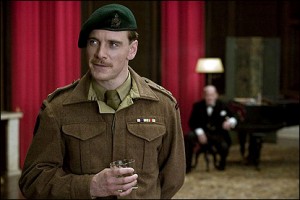 “It is incredibly exciting and a real buzz to have these large productions filming here,” Bamburgh Castle Director Chris Calvert told NCJ Media: “They were here setting up last week and when I came to work the car park had been turned into its own shanty town with trailers and marquees.

“It is phenomenal to have something like [this] at the castle. They have been filming outside with the castle as the backdrop before moving to film inside the grounds. The castle will be on big screens across the world and that is great for us and the region.”

It is incredibly exciting and a real buzz to have these large productions filming here ... When I came to work the car park had been turned into its own shanty town with trailers and marquees.

Macbeth is being produced by See-Saw Films and is shooting on location in both England and Scotland over seven weeks. The Isle of Skye in the Inner Hebrides is reportedly among the Scottish locations that will feature in the finished film.

Bamburgh Castle is also being used by Cuba Pictures’ period miniseries Jonathan Strange & Mr Norrell, which is filming across northern England and also in Canada and Croatia.

(Editorial note: This article has been amended to remove references to Ridley Scott's Robin Hood, which was inaccurately referred to as having been filmed at Bamburgh Castle.)