New TV drama From Dusk Til Dawn: The Series, based on the 1996 road-movie horror, has been given a second series and will continue filming on location in Austin, Texas. Filmmaker and movie mogul Robert Rodriguez directed the feature and is also behind the series. 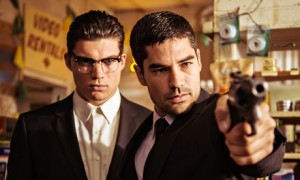 The original film starred George Clooney and Quentin Tarantino (who also wrote the script) as bank-robbing duo the Gecko Brothers, who end up cornered in a desert nightclub run by vampires as they flee the Law.

“This is a truly unique property and one that has really resonated for viewers,” said Rodriguez: “It has been a joy to bring these characters back to life and have the opportunity to take our storytelling to a whole new place. We look forward to going back into production later this year and are excited about raising the bar even higher in season two.”

Texas is not known as a filmmaking hub in the US, although Rodriguez is an exception as he is based locally, operating from his Troublemaker Studios facility.

It has been a joy to bring these characters back to life and have the opportunity to take our storytelling to a whole new place.

The state is in fact among the more popular filming locations for TV pilots this season, which will be partly due to its filming incentive, which is worth up to 22.5% with a short-term fund of nearly USD100 million.

Nonetheless, productions tend to double places like Louisiana and New Mexico for Texas locations. Dallas Buyers Club was a recent example of an Oscar-winning feature that took advantage of more competitive incentives to double New Orleans for the Lone Star State.