Written by Murray Ashton on Apr 8, 2014. Posted in On Location

Cambodia: Exploring the growth of an international filming location

I am on my way to Cambodia to meet with the film commissioner Cédric Eloy and visit the country. With over one hundred international productions of all sizes having shot there in 2013, I am keen to see why Cambodia is becoming such a popular filming destination.

During my time in transit in the Dubai airport terminal for the new Airbus A380 (the world's largest passenger airliner), I am amazed by the number of electronic shops selling screens in every shape and size. As I wait to board the flight to Bangkok virtually every passenger is holding an iPhone, iPad or Kindle in one hand and their boarding pass in the other. 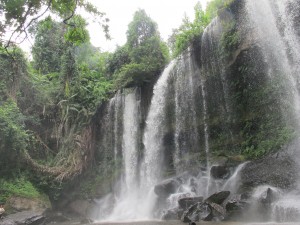 Once in the air I explore the immense choice of programming available on the Emirates in-flight entertainment system. From specialist documentaries on a host of subjects to new and classic movies, sports, news, games and reality TV they have it all and in virtually any language. The amount of visual content available on just this one flight is astounding.

Have you ever stopped and thought about how many people worldwide are looking at a screen and being entertained right now? Have you ever stopped to think therefore how many location shoots must be taking place right now to provide this audiovisual content that the world’s population is consuming with an ever-increasing appetite? Global production is increasing massively to provide for all these screens and all these people. Good news for the global production services industry!

A swift transfer in Bangkok to an Air Asia flight lands me in Phnom Penh, Cambodia’s capital and I take a taxi into town. The first thing that strikes me is the amount of Range Rovers. Range Rovers everywhere. I have never seen more Range Rovers anywhere in my life. This is a sure sign that despite a troubled history, Cambodia is truly a rising Asian economy. I am told later that property prices in some parts of Phnom Penh are reaching Parisian levels.

The morning of my arrival Cambodian director Rithy Panh entered movie history by becoming the first Cambodian to attend the Academy Awards ceremony for his Oscar-nominated feature film The Missing Picture. Although he didn’t win, he was named the 2013 Asian Filmmaker of the Year at the 18th Busan International Film Festival in South Korea. Shot in Cambodia but not on location, Panh used clay figures to re-enact scenes of what life was like in his childhood during the Pol Pot years and for which there were no images to portray the period.

Cambodia has a great variety of locations that can double for just about anywhere in South-East Asia and is often used as a location for exactly that purpose. At 181,035 square kilometres the country is slightly smaller than Oklahoma and has a population of nearly 15 million, offering lots of location filming possibilities to filmmakers. 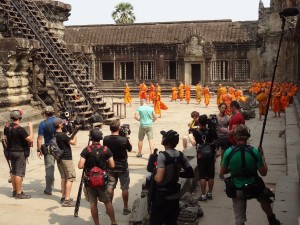 The famous temples of Angkor are monuments that are unrivalled in this part of the world. Phnom Penh and its riverside location offers the charms of the French Quarter, as well as modern locations. Upcountry, timeless landscapes can be found in rice paddies and sugar palms. The north-east offers wild and mountainous landscapes and the home to Cambodia’s ethnic minorities. The south offers beach locations and wonderful colonial architecture, plus rivers, national parks and tropical islands.

Big movies including Tomb Raider and Two Brothers have tried and tested both the locations and the local crew base of around 200 technicians. There are no formal filming incentives in place but Cambodia offers lower production costs instead. Crew rates are highly competitive. A Location Manager costs USD50 a day (USD400 a week), with no social charges on top and no paperwork. There are no expensive professional visas for foreign crews either.

Cambodia is an easy and flexible location to work in. Crew moves are relatively quick with few traffic jams compared with neighbouring Thailand and Vietnam. Cambodia offers less filming equipment than some of its neighbours but anything can be easily trucked in by road overnight from Bangkok.

A friend has recommended I end my trip with a visit to the remote island of Kho Rong (think Kho Samui 30 years ago), which is a two-hour boat trip from the mainland. He suggests a stay at a place called ‘Pura Vida’, which comprises six wooden huts at the end of a deserted beach. 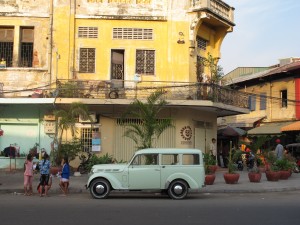 On arrival I am met on the jetty by a man with a small boat that whisks its way through the surf and drops me off further down the island. After a walk including wading through a river with my bag held overhead I arrive at ‘Pura Vida’. Now this is what I call remote!

As Vanny, the owner, hands me my hut key I hear noise from a walkie-talkie and a voice: “Quiet please - stand-by”. I can’t see anyone anywhere, just Vanny and I, and a very long stretch of virgin white beach. Somebody eventually appears from behind a tree carrying a walkie-talkie. A Location Manager or an Assistant Director, I ask myself? As Vanny takes me to beach hut number two she quietly explains that Kho Rong is the location for reality TV series Survivor.

The shoot location is on the other side of the island and can virtually be considered a permanent filming location as it’s regularly used by production companies from around the world shooting their versions of the Survivor format. Filming takes place round the clock for fifty days or more with one hundred foreign crew members backed up by the same amount of locals.

More location filming for all those screens and forever consuming audiences worldwide!