Paris-based Quad brought snow to springtime Valencia on the Mediterranean coast in a new spot for the Peugeot 301. Trip showcases the car’s all-weather qualities as a father drives his son to football practice through rain, summer heat and freezing snowfall. 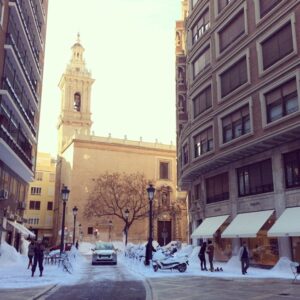 Barcelona and Madrid were both considered as filming locations but the production team ended up choosing Valencia, which offered good weather for the March shoot. Quad was also drawn to the city’s blend of modern and historic architecture, with wider streets than in some Spanish cities, which made it more suited to practical rain and snow effects.

It was also relatively easy to travel to the different locations that the team needed over the course of the shoot.

“The biggest challenges were the company moves. We had a dozen locations within the city to cover in only three days," explains Martin Coulais, an Executive Producer with Quad.

"Also, [we had] to get the permits to dress a whole street with snow [and] the rain sequence where we had all our special effects with massive fans and sprinklers. Not even mentioning the short period of time we had to obtain these permits. So, [it was] obviously a great city for filming!”

Everyone was amazed by the authenticity of the snow and couldn’t stop taking pictures. Even the local press.

Ana Laura Solis is an Executive Producer with servicing company Story: We Produce: “We hired a top special effects company (Nasa FX) based in Barcelona to help the art department with the snow and rain.

“One of the greatest challenges was that we shot the snow sequence on a Saturday, so by lunch time the shopping streets were filled with onlookers. Everyone was amazed by the authenticity of the snow and couldn’t stop taking pictures. Even the local press showed up. 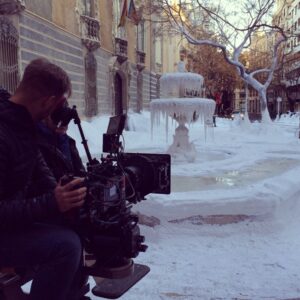 “If we didn’t have the local authorities help us shut off small roads and main streets, we would never have been able to pull this off. The local police was helping with traffic with a great attitude in support of the shoot. We are thankful of their total support and organisation.”

Spain is a popular filming location for both features and commercials, and was recently used in a high-profile series of ads for Volvo Trucks. The Hamster Stunt demonstrated Volvo’s precision steering and filmed on location in a quarry in north-west Spain.

Technician showcased the vehicle’s high clearance by safely driving over a Volvo technician’s head. Story: We Produce serviced this stunt and also worked on the hugely successful Epic Split featuring action star Jean-Claude Van Damme performing the splits between a pair of reversing trucks. The spot has been viewed more than 70 million times on YouTube.