The Spanish Balearic Islands are preparing for the third MareMostra Palma International Film Festival on the island of Mallorca. This year the festival - running from 26-31 May - will be focussing on cultural connections to the sea, both around the Balearics and internationally. 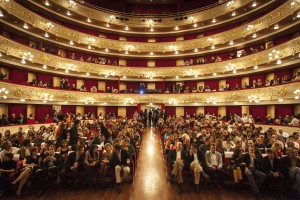 “As we are in Palma on Mallorca, the sea is a very important part of everyday life, just as it is for any island nation,” says German Traver, President of the Audiovisual Cluster of the Balearic Islands (CLAB), one of three organisations helping run the festival.

“The festival will be screening 70 films over five days, all of which will be highlighting the sea. MareMostra is more ambitious this time so we are moving into the centre of Palma and screening films according to a series of specific categories.”

MareMostra covers all types of motion pictures and entries are divided into six different categories: Sea and Activism, Sea and Commercial Films, Sea and Gastronomy, Sea and Science, Sea and Sport, and also MareMonstruo, a special section for fantasy and horror entries. The event is being promoted as Europe’s first marine film festival and is also intended as a way to address environmental issues by fostering dialogue between filmmakers and scientists.

The festival will be screening 70 films over five days, all of which will be highlighting the sea.

German Traver, President of the Audiovisual Cluster of the Balearic Islands

There will also be a market element to the festival, enabling producers to take meetings and network with their industry colleagues.

“MareMostra is also a great way to promote the Balearic Islands as a filming location,” Traver adds: “We can showcase our great conditions and skilled crew base, while also boosting international film tourism.”

To find out more about the festival click here.