A feature docudrama exploring the life of the decorated Trinidadian airman Ulric Cross has filmed in the UK and now shifts to Ghana. Hero tells the story of Cross’ experiences in the RAF during World War II, before he became a distinguished legal expert in Ghana, Tanzania and Cameroon. 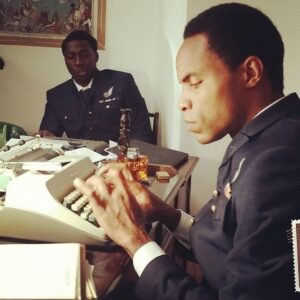 Cross spent nearly 20 years in the UK in the 1940s and 50s, serving as a navigator in the Royal Air Force during World War II and then later working for the BBC Caribbean Service.

“Ulric's years in England were key and it was essential for us to capture the vibrancy and excitement of post-War Britain when future leaders of the Commonwealth – Africa and the Caribbean - met in London to plan their independence from colonial role,” said Director and Producer Frances-Anne Solomon.

“They could not know that within 15 years most of their countries would be independent, partly as a result of their efforts.

“I could not be more thrilled with the inspiring story and production that has been Hero in London. The acting, camerawork, and design, are all fresh and impressive. We had the privilege of working with some of the most outstanding established and up and coming actors in Britain.”

Location filming will shift to Ghana through May to shoot scenes relating to Cross’ 15 years in Africa, where he forged a distinguished law career.

The UK is one of the world’s top production hubs with a generous filming incentive programme that also now supports high-end TV shoots.