Johnny Depp’s new movie Transcendence filmed mostly on location in New Mexico, with limited shooting taking place in California. The story follows Depp as a computer scientist whose mind is uploaded to a computer when he is gunned down by an anti-technology activist.

New Mexico was chosen as the main filming location because of its competitive base filming incentive of 25%, but all of the top production hubs in the US were considered. 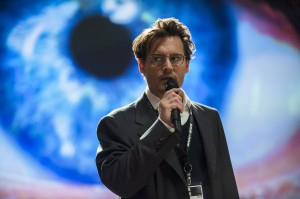 Much of Transcendence is set in a remote underground research facility in the fictional desert town of Brightwood. The production team built some of the interiors at I-25 Studios, a former pharmaceuticals manufacturing facility near Albuquerque that has been available as a filming location since 2006 and was the most cost-effective option in the area.

“Wally [Pfister, the Director] wanted something that felt both not of this world, but not purely science-fiction either,” says Production Designer Chris Seagers: “The stages off I-25 in New Mexico were perfect because they had low ceilings and very flat concrete floors, and very, very long corridors - one was 300 feet long - so we could shoot everything practically, which he likes to do as much as possible.”

Real laboratories were also used to boost the film’s sense of realism and some of these scenes were shot in California. Supervising Location Manager Chris Baugh and his team scouted labs across the US during pre-production.

We captured and relocated seven rattlesnakes from the set. At sundown we'd get 70-mile-an-hour winds.

“Some of the facilities were very high-tech labs with extremely expensive equipment,” Baugh explains: “This was the case at a lab in Orange County, California. The instruments were so sensitive that walking by with a cup of coffee would throw out their calibration. We hired the facilities’ own scientists as extras to stand guard over the equipment. They're in the movie.”

The production team also spent weeks building an array of new buildings and trailer homes in Belen, near Albuquerque, which stood in for exterior scenes set in Brightwood.

“We took over their downtown for about three month to make it over which included resurfacing most of the structures, building out their interiors, laying dirt over the paved streets and constructing a full size three-storey hotel that was later demolished,” Baugh recalls.

“The citizens were very co-operative, but I imagine it wasn't easy to have us around with mortar cannons and automatic weapons for that amount of time.”

A solar field was built south of Belen in Rio Puerco to stage many of the film’s action scenes and here the team shot through the height of the New Mexico summer. 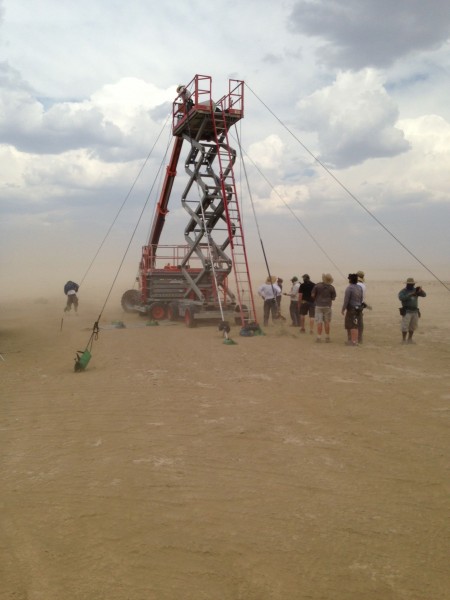 “The desert area where the solar field was shot occurred in July in 110-degree heat with major dust storms and periodic torrential rain,” Baugh comments: “One day we captured and relocated seven rattlesnakes from the set. At sundown we'd get 70 mile-an-hour winds. It was not a pleasant environment. When you got home at night, you'd find the red desert dust everywhere.”

Weather and other environmental factors were among the main challenges the team faced during the shoot. They had to be accompanied by “an entire fire department company” to film a scene at a location that was within just a few miles of a forest fire, while a set build on a river bed that had been dry for three years was destroyed by a flash-flood on the last day of filming. Spotters and an effective escape plan ensured everyone got out safely ahead of time.

Wally Pfister had in fact wanted to shoot Transcendence entirely on location in California, but with a production budget of USD100 million the film did not qualify for the state’s filming incentive support.

California’s filming incentives pales in comparison to rival programmes in places like Louisiana and New York.

Sometimes the convenience of local facilities in Los Angeles and cast and crew being able to spend nights in their own homes is enough to offset small differences in regional tax incentives. This was not the case for Transcendence, but authorities in California are lobbying to boost the state incentive in the coming months to expand support to big-budget movies.