Filming took place on location in New York for The Amazing Spider-Man 2, with studio work at Gold Coast Studios and Grumman Studios on Long Island. The film follows Peter Parker’s relationship with Gwen Stacy as the villainous Electro targets Spider-Man.

The production team filmed on location across New York City and also in Rochester near Buffalo in the west of the state. 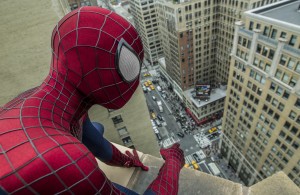 “New York City always was and always will be Peter Parker/Spider-Man’s domain – through birth, through growing up, through high school and the famous Empire State University,” says Producer Ari Arad.

“Shooting the entire movie in New York was a unique opportunity to capture the sights and sounds of Peter’s world.”

The team was keen to showcase the whole city, rather than simply focussing on the more iconic locations.

“New York is not just Midtown,” considers Production Designer Mark Friedberg: “It’s Queens, it’s Brooklyn, it’s DUMBO (Down Under the Manhattan Bridge Overpass), it’s the bridges and tunnels – in fact, Spider-Man leaves a message for Gwen on the side of the bridge from under the FDR [bridge].

“There are neighbourhoods that don’t get a lot of exploration on film – places you’d never think to go if you were only shooting in New York for two weeks.”

We all know what Times Square looks like – it’s an iconic venue. Even though we were recreating it, it had to look and feel exactly like Times Square.

The iconic Times Square features in an action set-piece where Spider-Man and Electro have a dramatic clash. Limited shooting took place in the real Times Square, but the physical and effects demands of the sequence meant the production team also needed to recreate the location at Gold Coast Studios on nearby Long Island. 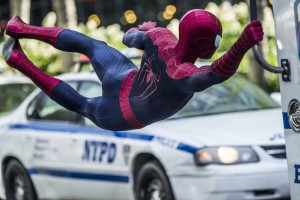 “We all know what Times Square looks like – it’s an iconic venue,” explains Producer Matt Tolmach: “Even though we were recreating it, it had to look and feel exactly like Times Square.

"We built a set that was literally the size of Times Square, with green screens literally as large as the screens that you see in Times Square – and we lit it up like Times Square. The scope was simply enormous.”

Extensive sets for the various sections of Oscorp – the firm inherited by Peter Parker's former classmate Harry Osborn – were constructed at Grumman Studios, also on Long Island. The sleek and expansive lobby of the Oscorp building itself was built at the Marcy Armory in Brooklyn.

“The challenge for us was to build the lobby of what should be a half-billion dollar building, not using a half billion dollars, and try to make good or interesting architecture,” Friedberg adds.

New York has become one of the top production hubs in the US and, indeed, in the whole of North America, partly as a result of its generous 30% filming tax credit that has an annual fund of USD420 million.

Television production is sifting to New York in a big way as well. Pilot production is surging and Disney/Marvel recently announced a major production deal to shoot five upcoming superhero series on location in the state.