Tunisia plans to boost regional film tourism by preserving a desert set built for the Star Wars prequels in the late 90s. The seventh Star Wars film is rumoured to feature a return to the desert world of Tatooine, a key location in the Star Wars universe. 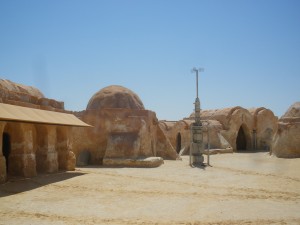 Pinewood Studios in London is the only filming location confirmed so far by the Lucasfilm producers, but Tunisian authorities are hoping that the country may be considered for any planned Tatooine scenes.

Star Wars creator George Lucas built Luke Skywalker’s desert homestead in Tunisia for the first Star Wars film in the mid-70s. In the late 90s Lucas headed to Ong Jmel in the south of the country to build the set for ‘Mos Espa’ (left), a key Tatooine location in Star Wars: Episode I - The Phantom Menace. The set is rapidly being claimed by the desert but a fundraising campaign has been set up to raise the EUR33,000 needed to preserve it.

“Mos Epsa is located in a very windy region, threatened by sand dunes which the wind moves by around 15 metres a year,” said Nabil Gasmi, a local tourism professional, in comments to the AFP news agency.

Tunisian authorities are hoping that the country may be considered for any planned Tatooine scenes in the new Star Wars film.

“One dune has already buried 10% of the site. We managed to remove 8,000 cubic metres of sand in 12 days. Unfortunately some of the set has already collapsed," Gasmi added.

Film tourism can have a major economic impact locally. In New Zealand the refurbished set of Hobbiton was built as a permanent structure for Peter Jackson’s Hobbit trilogy to enable its use as a long-term tourist attraction. More recently, Northern Ireland has launched a new film tourism campaign to promote the region internationally with the launch of the fourth season of Game of Thrones.