Bollywood star Salman Khan is filming his new movie Kick on location in Warsaw, central Poland. Khan is scheduled to film in the city throughout April and the movie will also shoot on location in Mumbai. 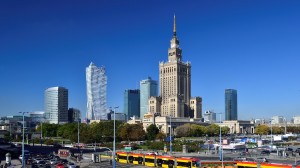 Kick will involve action scenes filmed in and around Warsaw’s Palace of Culture and Sciences, which is the tallest building in Poland and among the tallest in the European Union. Local servicing will be provided by Film Polska Productions.

Poland is a popular filming location for Bollywood shoots. Productions are drawn partly by the European architecture, which contrasts sharply with the cityscapes of India. The two countries made a formal location filming co-production agreement in mid-2012, which covers laboratory processing and equipment transfer, as well as funding deals. India has similar agreements in place with multiple countries around the world.

Kick will involve action scenes filmed in and around Warsaw’s Palace of Culture and Sciences, which is the tallest building in Poland.

In July last year, Tourism Ireland in India arranged an extensive location scout in which Bollywood producers were showcased the island of Ireland in conjunction with both Northern Ireland Screen and the Irish Film Board. Action thriller Ek Tha Tiger is among the productions to have shot on location in Dublin in recent years.