Game of Thrones will keep filming on location in Northern Ireland for its fifth season, the Northern Ireland Executive has confirmed. Cable network HBO has announced it will make at least two more seasons of the fantasy drama, which has just launched its fourth series. 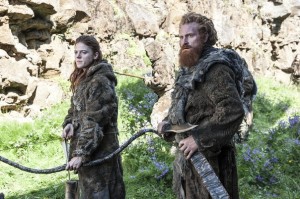 “Continued investment by major production companies such as HBO ensures that Northern Ireland’s creative industries continue to lead the way on the world stage.

“This week’s season four premiere of Game of Thrones was watched by a record 6.6 million viewers, making it one of HBO’s most watched programmes. This has both direct and indirect benefits as Northern Ireland continues to establish itself as a prime tourist destination and investment location.”

Added Deputy First Minister Martin McGuinness MLA: “When we were in the US in March we met with Jay Roewe, Senior Vice President of Production for HBO Films & Mini Series, and other senior executives to reinforce our continued commitment to work closely with HBO to secure the fifth series.”

Securing the fifth series of Game of Thrones, HBO’s largest drama production in Europe, will generate in excess of GBP20 million annually.

Northern Ireland recently launched a new film tourism campaign promoting the locations used in Game of Thrones and this will run in nine different countries for the next eight weeks.

The series gets financial support from Northern Ireland Screen and the show is based in the Titanic Quarter of Belfast, a facility which recently announced plans to build two more sound stages as part of a planned GBP14 million development.

Additional key filming locations for Game of Thrones include Iceland and Croatia.