Written by The Location Guide on Apr 24, 2014. Posted in General Interest

Spring has brought foreign filmmakers to Poland. As Film Commission Poland (FCP) reports, a big Indian production is about to wrap in Warsaw, another Bollywood film is coming to Krakow, a BBC crew has toured the country by train and AXN will shoot on the coast.

Filming on Salman Khan’s big-budget Bollywood production Kick is coming to an end after 16 days in Warsaw. The capital of Poland has been chosen as a location mostly due to the goodwill of the municipality, which authorised filming for car chases and bus wrecks.

Krakow will be the next Polish city to host Indian filmmakers. In July the producers of the Bollywood hits Don, Don 2 and Zindagi na Milegi Dobara are bringing a crew of a hundred to the city for 40 days to shoot Bangistan, an action comedy set in Krakow.

Meanwhile the BBC crew used the Polish rail service and travelled across the country to shoot an episode of Great Continental Railway Journeys, a documentary series for BBC2. Regional film commissions from Warsaw, Poznań and Wrocław participated in the logistically challenging production. 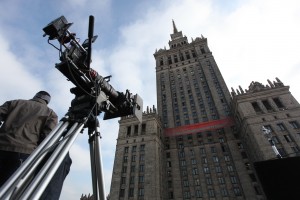 Just recently, AXN Central Europe has announced the production of its first Polish production, a three-part miniseries based on Swedish crime drama The Sandhamn Murders. Filming is planned for June and will take place by the picturesque Hel Peninsula on the Baltic Sea coast.

FCP’s comprehensive production and location guides are available at www.filmcommissionpoland.pl. The refreshed version of the website and database will be launched in May.