Hungry Man filmed on location at a 12th Century castle in southern France for a new commercial for Mentos mints. Never Surrender offers a dash of Monty Python humour as a knight riddled with arrows is kept alive and ‘fresh’ with a packet of Mentos. 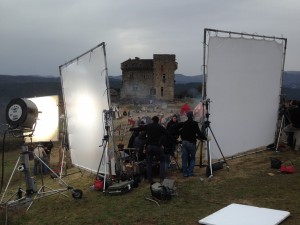 The production team considered filming locations in Spain, Scotland, Ireland and Eastern Europe before setting their sights on France where they had a broad choice of castles with better weather conditions. Location filming options comprised 50 separate castles across the south of the country from the Mediterranean to the Atlantic.

“I scouted eight castles and some landscapes in the south of France,” explains Gilles Dary, a Researcher and Location Scout for La Creative Factory: “The director selected two as possible perfect locations and as soon as he saw the castle of Aujac he told us that was the place to shoot.”

Hungry Man and servicing company Hanne Evans Production Services took a crew of a hundred to Le Chateau du Cheylard D'Aujac in south-eastern France. No changes were made to the castle itself, aside from draping a flag from a window.

The chateau was a film-friendly site, but local accommodation options were limited for the hundred-strong crew.

Location filming options comprised 50 separate castles across the south of the country from the Mediterranean to the Atlantic.

France is a popular international filming location and qualifying productions can get financial support through the TRIP (Tax Rebate for International Production), a filming incentive that also applies to France’s overseas territories.

Amazon Studios recently announced it will be filming TV pilot The Cosmopolitans on location in Paris and US network NBC has already shot a new miniseries version of classic horror story Rosemary’s Baby on location in the city.