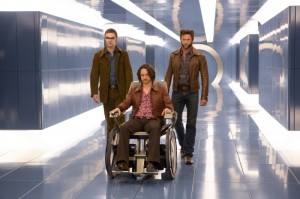 Production was based at the 27-acre studio facility Mel’s Cité du Cinema in Montreal, but there was also extensive location filming at nearly 40 separate sites around the Canadian city.

Forty sets were built at the studio, the biggest of which was an Exterior Monastery that covered Mel’s 36,500-square-foot Studio H. In the context of the story this was where all the X-Men characters were reunited and was also used as the setting for a major action sequence.

The production team also built an Exterior White House Lawn on the studio back lot, which involved creating a vast 40,000-square-foot set boxed in with a hundred shipping containers. Landscaping techniques created the lawn and green screens were draped across the container walls for background visual effects to be added in post-production. 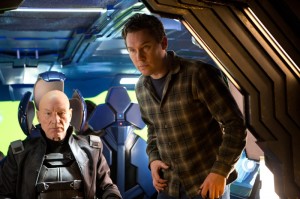 Local production support was made available by the Quebec Film and Television Council, especially when the X-Men production team needed to liaise with local authorities for logistical support and to get location filming authorisation.

X-Men: Days of Future Past is the first in the comic book franchise to shoot on location in Montreal. The previous films were largely shot in Ontario and British Columbia, while Hugh Jackman’s spinoff movies X-Men Origins: Wolverine and its follow-up The Wolverine were both based in Australia.

Montreal is firmly established as a popular international filming location. The province offers a competitive 25% filming incentive and a separate 20% incentive for local visual effects work, which has resulted in both Cinesite and Technicolor announcing new Montreal offices in recent months.