Scenes for BBC Films' new period feature Testament Of Youth have been shot on location in Sheffield in northern England. The feature is based on Vera Brittain’s famous memoir of the First World War and follows the writer’s experiences of the conflict. 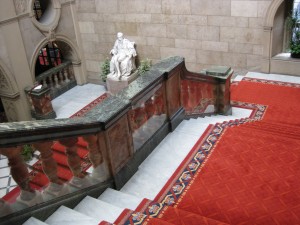 “We are delighted to be filming in Sheffield,” producer Rosie Alison told The Star: “One of our backers has been Yorkshire Film (Screen Yorkshire) which has helped make our filming possible - a lot of our filming has been done in Yorkshire.

“We like to film things in locations fairly close together and our location scouts found this building which is near Sheffield Town Hall where we were filming on Sunday and at Sum studios in Heeley on Monday. There is a fantastic corridor in the Town Hall that we used as a setting for a World War I hospital scene.

“In the scene on North Church Street we film Vera at a political meeting at a town hall and this building and its doorway are perfect.”

Brittain’s memoir charts her experiences from an Oxford scholarship to the battlefields of France as a volunteer nurse and the horrific loss she endured through the course of the war.

Testament Of Youth is filming on location in Yorkshire, London and Oxford, and is being supported by Screen Yorkshire.

Television production has greater financial support now in the UK since the launch of a TV tax credit in mid-2013. Filming locations outside London are increasingly popular and the BBC has a base in Cardiff and also in Salford in Manchester.