The producers invested a lot of time discussing the logistics of the shoot with government officials and scientists in Beijing to explain the practicalities of native 3D filming. Government agency the China Wildlife Conservation Association joined the team as a co-producer. The film was made for Sky3D and National Geographic Cinema Ventures. 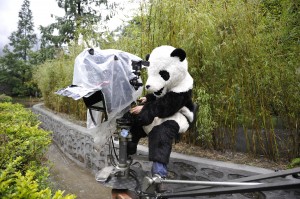 Filming began in mid-2012 and involved three separate trips to China, with shooting taking place at a panda breeding facility in the city of Ya’an and at the Wolong National Natural Reserve. Shooting in ultra-high resolution and in 3D became one of the central challenges, due to the cumbersome nature of the equipment, the tricky terrain and the problems of inclement weather conditions.

“[This equipment] was developed for use in a Hollywood studio,” says producer Caroline Hawkins: “Yet here we were taking it across the world to a remote part of China, taking it up into the mountains where everything is wet, climbing up muddy hillsides with this sensitive piece of equipment.”

Director Nicolas Brown adds: “It took half an hour to turn the camera around 180 degrees. You cannot operate with any sense of urgency. Everything has to be storyboarded and planned. You have to engineer things to happen in front of the camera.”

It took half an hour to turn the camera around 180 degrees. You cannot operate with any sense of urgency.

Safety was also a major consideration. An aggressive panda can be a dangerous animal, so the production team built a cage with iron bars to house the camera and the crew. The cage was specifically designed to enable them to film the pandas without getting the cage bars in shot.

The shoot was building up to the release of a captive-bred panda called Tao Tao, so the team faced a major issue when the Chinese government decided to exclude Westerners from filming the event. Director Zhang, head of the Wolong Panda Organization, tackled the problem by securing Brown an audience and toast with the powerful forestry commission head.

“Everyone at the table saw me talking and drinking with the most powerful man,” Brown recalls: “At literally the eleventh hour we got permission to shoot.”

Nonetheless, additional covert tactics were needed to actually witness the ceremony as Tao Tao was released into the wild. Several crew members were smuggled in with the ceremony’s security team, while Brown came in hidden with a dance troupe.

“At the last minute, we were able to put up a camera position, hide there and get the shots we needed to finish the story,” Brown concludes: “That was the most dramatic climax in terms of filming. It was one of the hardest shoots any of us has done.”

Pandas: The Journey Home is screening in selected zoos, museums and aquariums.