Seoul-based production company Prosum Inc has been filming documentary Becoming Who I Was on location in the Ladakh region of northern India at the foot of the Himalayas. The production follows a young boy who has been 'recognised' as ‘Rinpoche’, or ‘Precious One’ in Tibetan Buddhism. 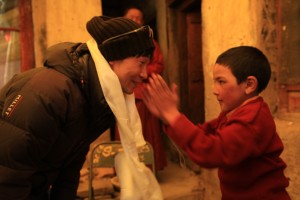 Producer Jin Jeon of Prosum Inc has been working with the award-winning Korean director Chang-Yong Moon on the production. The filmmaker first met and filmed the young boy and his family in Ladakh in 2009 when the boy was just five years old.

A year later, in 2010, the boy was recognised as a Rinpoche. This means he is believed to be part of the highest order of Tibetan Buddhist monks and the reincarnation of a spiritual lama, who in the coming years will need to find the Tibetan monastery and disciples of his past life.

The title of Chang-Yong Moon’s film, Becoming Who I Was, refers to this search and the production team has now been following the young Rinpoche’s life for the past five years.

Chang-Yong Moon is approaching the halfway point of the documentary and two further trips to Ladakh are planned over the next six months.

Filming at the base of the Himalayas has posed a set of logistical challenges over the course of the shoot. Ladakh is accessible via a domestic flight from New Delhi to Leh, the main city in the remote Ladakh region of Jammu and Kashmir. The team uses Leh as a base to drive to and from the village of Shakti, where the Rinpoche is based. Given that the region is wrapped around the foot of the Himalayas, adjusting to the altitude is the first challenge.

“The first day we arrived in Leh, we had to sleep the whole day - not merely due to jet lag, but because of the high altitude,” Jeon recalls: “Nonetheless, we went straight into shooting on day two, but suffered with altitude sickness. We had to overcome this and continue shooting everyday because time is money when you're out on a shoot with the reality of incomplete funding.

“With high-altitude sickness, we couldn't just run around and run after the young boy. He and his guardian uncle were playing soccer the one day and to chase after them and the ball, with camera in hand at such a high altitude was incredibly difficult. You just can't breathe!”

The team is challenged by the realities of everyday life in Leh when they are not filming with the Rinpoche and his family in Shakti. 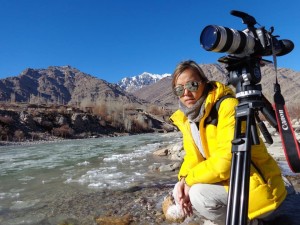 “When we were there in the winter, it was so cold that the pipes were freezing up and so all the hotels closed all the taps,” Jeon explains: “There was absolutely no water and we had to get delivered kettle-boiled hot water - in a small bucket each - to wash ourselves every night, after an exhausting full day of shooting. No hot shower - no such luxuries. Also, not a lot of tourists go to Ladakh in winter, except for the extreme expeditions. So, most hotels were all closed. We felt rather isolated out there.”

Filming on location in the Ladakh winter has been a challenging experience, but Moon, Jeon and the crew are keen to continue capturing the full beauty of the region as they film the young Rinpoche for another year.

“We want to capture the different seasons in the beautiful Ladakh and also see the characters evolving and changing over time - and of course, see the boy growing up and entering adolescence just like everybody else, even if he is of noble birth,” Jeon says.