The production team was looking for a filming location to shoot a winter episode of the Tough Trains series. Alaska was considered but Siberia’s Yamal Peninsula offered more enticing possibilities.

“Siberia was chosen for various reasons,” Munro Productions' Alyona Pimanova explains: “Although the winter climate and snowfall makes running trains undeniably tough in both Alaska and Siberia, in Russia we could travel to the northernmost point in the world reachable by train.

“As well as the tough trains in Siberia, there were various other back stories which made the journey particularly interesting: the use of trains to export gas (condensate) from the region, and the plan to build a new 'Northern Latitudinal Railway', which in part will follow the route of the so-called Railway of Death built under Stalin.” 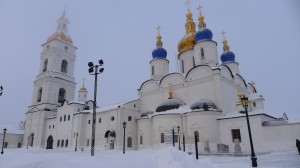 Filming also took place with the indigenous Nenets, a nomadic people who have been herding hundreds of thousands of reindeer on the Peninsula for centuries, sometimes travelling thousands of kilometres a year.

The small production team comprised just a cameraman, a producer/director, a presenter and Pimanova herself. Filming in fact began in the gas fields around Tobolsk in central Russia and then moved north to Salekhard at the base of the Yamal Peninsula. The team then travelled on a train run by the Russian energy giant Gazprom from Obskaya to Karskaya, which is the world’s northernmost railway line.

Filming on the wintry conditions of Stalin’s Road of Death railway was a major challenge. Work on the Siberian section of track began in 1947 using prison labour from Stalin’s infamous Gulag camps and tens of thousands died in the freezing conditions. Stalin intended the railway as a way of taming the Russian Arctic but production was halted with his death in 1953 and the railway was left incomplete.

“It was a challenge to spend up to seven hours outside in -30 Degrees Celsius conditions, not just for the crew but also for the equipment,” Pimanova comments: “Filming at the remaining Gulag camps, moving through the snow you need to follow the deep steps of the person in front of you so not to get stuck."

“The ice road can be very unpredictable depending on lots of factors," she adds: "The weather is very changeable and it is the only existing road from Nadym to Salekhard. We had to stop several times and wait for the trucks to pass. When trucks get stuck on the road, you will have to wait for the tractor to come and help.”

Given that the region has no mobile phone signals, communication was a challenge. The production team was equipped with jeeps and drivers familiar with the road, along with satellite phones in case of emergency.

Tough Trains will be screened internationally as a full series in 2015.