London-based Adrian Harrison Film Company has captured the modernity of Madrid in a sleek new spot for Lexus featuring the vehicle gliding through the city streets. The shoot was serviced locally by Seaquist A Company of Malaga. 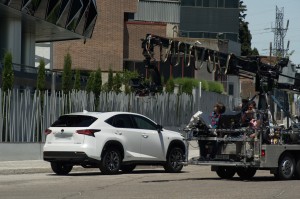 “Madrid is a great city to shoot in,” explains Robert Seaquist of Sequist A Company: “Permits are easy and the crews are good. Plus it is not a city that has been over shot, so you can do things there and you are not really sure where you are.

“I think for all service companies the largest problem these days is finance. The amount of money you receive to do a production is never quite equal to what is needed. The costs are down but the quality demanded is as high as always. Fortunately a director like Konrad Begg makes it all a lot easier and you can see the results.”

Spain is a hugely popular filming location for both features and commercials, despite the lack of a formal filming incentive programme. Recent brands shooting in the country include Peugeot, which turned spring into winter in Valencia, and the watch brand Titan, which shot on location in Madrid.