Production company Zola filmed on location in the Brazilian city of Curitiba and in Barcelona for a new World Cup spot for telecoms company Claro. The Star Player focuses on young Brazilian superstar Neymar and the heroic role his country hopes he will play. 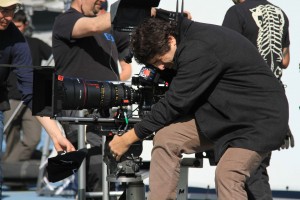 Brazil filming focussed on the city of Curitiba south of Sao Paulo and encompassed more than a dozen different locations over a single day of shooting.

“It was a project that required well-oiled logistics,” comments Jimmy Palma, founder of Zola and an executive producer: “We were pleased that despite the complexity of the project our production was impeccable.”

Scenes involving Neymar himself were filmed in Spain to accommodate the FC Barcelona star’s busy schedule.

Speaking more generally about the impact of the World Cup in Brazil, Palma adds that the international focus on the country has enabled Brazilian crews and talent to develop their world-class production experience. The event has also given the Brazilian commercial industry an opportunity to build on the country’s profile and reveal exactly what is on offer to the rest of the world.

We were pleased that despite the complexity of the project our production was impeccable.

“The impact [on the production industry] will not be only on volume but also on quality,” Palma considers: “The country will receive a large flow of international work, not only from foreign producers but also from international agencies. Major opportunities will appear for Brazilian producers who are prepared to work internationally.

"Possibly the greatest legacy of the World Cup will be the image left of Brazil as a production centre."

To read The Location Guide’s full review of Brazil’s commercial industry against the backdrop of the World Cup click here.