US considers relaxing rules for use of unmanned filming drones

The Federal Aviation Administration (FAA) in the US is considering a production industry request to relax existing rules on the use of drones for filming purposes. Flying commercial drones – or unmanned aircraft systems (UAS) – is tightly regulated in America. 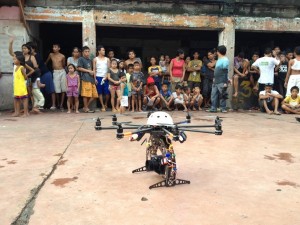 In the production industry, drones usually resemble small helicopters with a series of miniature rotor blades attached to a moveable camera rig.

Often a pair of operators is required, with one piloting the device by remote control and the other using a separate control to move the camera. Drones offer a more flexible way to safely and efficiently film aerial footage

“This new tool for storytellers will allow for creative and exciting aerial shots, and is the latest in a myriad of new technologies being used by our industry to further enhance the viewer experience. We welcome the FAA’s leadership and support their guidance to safely authorise the use of UASs for the motion picture and television industry.”

Drones are already used extensively around the world in features, commercials and music videos. Recent examples include a specially-designed 720-degree system used by Stink Digital in Portugal and an OctoCopter rig used in Manila for a music promo for UK band Rudimental.

The devices are in fact already used extensively in the US, although the official rules state that an operator must use a licensed pilot and a certified system approved by the FAA.