Elstree Studios in north London is consulting with the production industry over use of its new back lot space. The studio, which has hosted recent productions like dance comedy Cuban Fury, has cleared some of its disused land and is now talking to the industry about the new space. 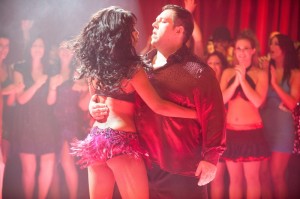 “If you look at the site as it is here, it’s absolutely vast and you could accommodate probably two or three George Lucas buildings, so it’ll make us a fantastic studio enterprise.”

Elstree offers seven film and TV sound stages and 60,000 square feet of space. The new back lot space started its clearing process in autumn last year and has now increased the facility’s overall offering by around 20%.

Several of London’s major film studios are feeling the pressure to expand their facilities to cater for international demand. Warner Bros purchased Leavesden Studios outright after filming all of the Harry Potter films at the facility, and the studio then underwent a major refurbishment. Pinewood is engaged in a long-term effort to expand its own facilities, but has faced major opposition from local residents.

London has also become more popular for international television production since the TV tax credit was launched early last year. Film London has responded by making more industrial buildings available for adapted use as TV film studios and this option was taken up by the action miniseries 24: Live Another Day.