Hit Sky 1 comedy Trollied is returning to shoot a fourth season on location in Bristol. Set in a supermarket in Warrington in north-west England, the series films on a purpose-built supermarket set at The Bottle Yard Studios. 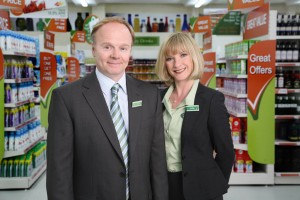 “We’re very happy to return to The Bottle Yard Studios with Trollied 4,” said Tim Sealey, Head of Production at Roughcut TV: “The studio works so well for us. It gives us the space to fully realise our supermarket and the support from the studio’s on-site team is top notch. It feels like we are coming home.”

“Since then they’ve added three smaller sets and a full production village, including dressing rooms, make up and costume facilities. The team has established a real home with us, and we love having them back for every new series.”

The studio works so well for us. It gives us the space to fully realise our supermarket.

The Bottle Yard Studios opened in 2010 and offers 300,000 square feet of production space. Recent shoots have included the Channel 4 miniseries New Worlds and the studio is currently home to period dramas Wolf Hall and Poldark. Equipment supplier Filmscape Media recently opened a branch at the studios, marking their first base outside London.

Trollied will film on location for the next seven weeks and will be broadcast later in the year.