Kiefer Sutherland will film night scenes for his rebooted action miniseries 24: Live Another Day on location in Southampton this week. The new show is based in London but will branch out to DP World’s Container Terminal in the port city on England’s south coast. 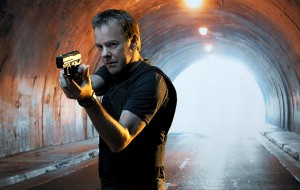 “We are extremely excited to have a major production like 24 filming at the terminal,” a spokesman told Newsquest Media.

“It’s a great opportunity to promote the port and city. This is the first time an American network has shot an entire TV series in the UK, so it’s appropriate that it should be filmed at the UK’s most productive container terminal.”

The DP World Southampton Terminal spans some 80 hectares and is coming to the end of a major expansion phase. More than 750,000 cars are expected to pass through the terminal this year for export around the world.

Kiefer Sutherland’s new 24 miniseries reboots the adventures of counter-terrorism agent Jack Bauer and was one of the first major international series to confirm a London shoot after the UK’s TV tax credit was launched in the spring of last year.

24 was one of the first major international series to confirm a London shoot after the UK’s TV tax credit was launched in the spring of last year.

London has established itself as one of the top production hubs in the world and is currently the studio base for Star Wars: Episode VII and The Avengers: Age of Ultron.

International productions are increasingly moving out of London, with Da Vinci’s Demons based in south Wales and Disney Channel recently announcing plans to film its TV movie Evermoor in Cheshire in northern England.