An eye-catching new commercial from BMW has caused a stir because of its unusual filming location. Ultimate Racetrack promotes the BMW M4 by showing the car skidding around a racetrack. Midway through the spot, the racetrack is ‘revealed’ to be the deck of an aircraft carrier.

Online reaction has centred on whether or not the production team did in fact convert an operating aircraft carrier – the ship is shown apparently on the open ocean – and turn it into a racetrack for BMW. Toronto-based agency Cundari has remained tight-lipped, which is probably a smart move given that the mystery surrounding the shoot has, at the time of writing, helped drive the spot to nearly 3.5 million YouTube views.

“It's wonderful to see that our video has sparked so much conversation around the world,” says Andrew Simon, Chief Creative Officer at Cundari: “Instead of weighing in on the debate, we encourage everyone to view the spot and decide for themselves.”

So, is the spot real or fake? Well, the clues are in the shot selection. The first half is filmed with a succession of close-ups that lead us to believe the car is on a conventional racetrack, most likely because that’s precisely where it is. The big ‘reveal’ of the carrier as a racetrack looks like an unconvincing digital creation that appears in only a few wide shots, and the subsequent close-ups look doctored as the car navigates a corner and narrowly avoids plunging into a digital ocean. 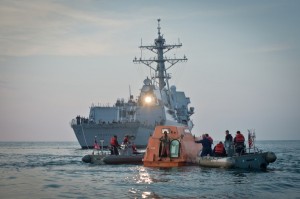 One shot does suggest the production spent at least a few hours filming on a real carrier, which is an accomplishment in itself as military vessels are notoriously tricky to secure as filming locations. As the car skids past the carrier control tower, the number ‘74’ is visible on the structure. This reportedly identifies the vessel as the USS John C Stennis, which has been in dry dock in Washington State for the past year and so could feasibly have been used as a filming location.

American military forces frequently assist filmmakers as they’re aware that positive PR is always worth pursuing and can drive recruitment. The US Navy was happy to assist with the production of Tom Hanks’ true-life drama Captain Phillips (above), as it was a good opportunity to recreate a stand-off with Somali pirates that ended successfully for the Navy.