Wanda Productions filmed on location in Vancouver and nearby Squamish for a new spot for the Nissan X-Trail. Adventure Calling features a motorist chasing a thief who escapes by bike before making a wilderness skydive, only to be then revealed as the driver’s more adventurous doppelganger. 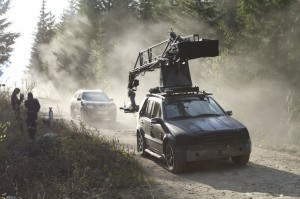 “The initial concept of the ad was to have mountain-biking, motor-biking, river rafting, parkouring and base jumping!” explains Heinrich Beisheim, Head of Production at Vancouver-based service company Means of Production.

“Vancouver, BC, immediately comes to mind where you can find these activities within 45 minutes of the Vancouver downtown core. Besides the locations we have the Ultimate Arm, Warthog (off-road camera car) and very experienced stunt people who work on big Hollywood action films.”

Means of Production had just seven days to prepare the shoot in Vancouver and the parachuting sequence, which was filmed in several locations in Squamish within an hour’s drive of Vancouver along the Coast Mountain Range.

“Another challenge,” Beisheim adds, “was moving the film unit around between hard-to-access locations in the mountains. Equipment trucks could not go up certain mountain areas so we had to shuttle four-by-four trucks in concession to get equipment, personnel and food up the mountain.”

British Columbia is a popular filming location because of its generous base tax credit of 33%, skilled crew base and strong studio infrastructure. The province routinely stands in for other parts of the world, recently doubling for California in both Dawn of the Planet of the Apes and the child murder drama Gracepoint.