Scotland is anticipating a film tourism boost as the launch date approaches for TV miniseries Outlander. Based on novels by Diana Gabaldon, the show filmed on location near Glasgow and tells a time-travelling story that flits between World War II and the mid-18th Century. 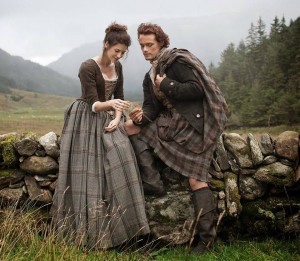 Produced for the Starz network, the series has been based at Wardpark Studios, a former factory in Cumbernauld that has been adapted for filming purposes. Location filming has also taken place around Scotland.

The show was promoted at Comic-Con in San Diego over the weekend, ahead of its September launch date.

“The television series is potentially huge for Scotland and could well be our answer to Game of Thrones,” said Mike Cantlay, Chairman of VisitScotland: “Scotland really is the star of Outlander and its focus on stunning scenery, romance, adventure and ancestry make it a fantastic advert for Scotland. Research has shown that around a fifth of visitors to Scotland are inspired to come here after seeing it on television or on film and, that being the case, we are hoping for big things from Outlander.”

Scotland is an increasingly popular international filming location but does not yet offer a large-scale purpose-built studio facility. The government recently conducted a feasibility study and Wardpark Studios was shortlisted as a potential site for expansion.

Game of Thrones has had a transformative effect on Northern Ireland’s production industry and Scotland is hoping that Outlander will have a similar regional impact.