The producers of the Netflix political drama House of Cards have been refused permission to film in the UN Security Council chamber in New York. Authorisation was in fact on the verge of being granted, before a last-minute Russian veto. 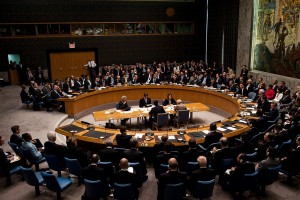 British diplomat Michael Tatham had urged UN Security Council (UNSC) members to authorise the Netflix shoot as a way of raising “awareness among a large audience around the world regarding the world of the Security Council, and of the organisation in general,” according to Foreign Policy magazine. Russia was, however, unconvinced.

House of Cards could still film in the UN building, but will not be allowed into the Security Council chamber unless Russia has a change of heart. The UN building - situated on international territory in Manhattan - does allow filming in certain areas and has been used in recent years by productions like 2005 thriller The Interpreter, with Nicole Kidman and Sean Penn.

House of Cards has largely doubled Baltimore in Maryland for Washington, DC, over the course of two seasons. The producers reached an agreement to stay there for the third series after a brief tussle with state authorities over available filming incentive support, which saw the start of filming delayed by several weeks.