Film set recycling company Drèsd has opened a new base at The Bottle Yard Studios in Bristol in south-west England. The company specialises in recycling sets from film and TV productions, and the development marks the firm’s first move beyond the south-east of England. 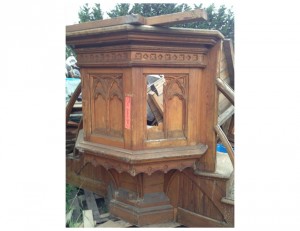 Sets are often taken directly to landfill sites after use, but Drèsd runs a more sustainable service by recycling leftover waste and reselling it as repurposed material. In recent years the company has recycled nearly 400 tonnes of set waste from productions such as Fast & Furious 6, The World’s End and 47 Ronin.

“Alongside Drèsd’s core work of clearing sets in a sustainable manner,” said the company’s founder Lynn MacFarlane, “at our new south-west location in Bristol we'll be offering a re-purposing prop house, design and build workshops for interiors and events, up-cycled set building, in house creative workshops and training, as well as running apprenticeship schemes in conjunction with The Bottle Yard, local schools, colleges and Bristol City Council.”

Added The Bottle Yard’s Managing Director Fiona Francombe: “Departing productions will be able to send less waste to landfill whilst incoming productions will have the chance to benefit from what is left behind by others. It’s a win-win situation and one that helps us to reduce our carbon footprint.”

Sustainability in the international production industry is an ongoing issue and the UK film industry alone generates 125,000 tonnes of emissions a year, according to the 2009 Green Screen report. The bulk of these emissions come from the UK’s studios, but nearly 20% comes directly from location filming.