Partizan filmed in Cape Town for a stunt spot promoting the BMW M235i coupe. The commercial features a group of identical BMWs demonstrating the vehicle's technical prowess in a tightly choreographed ‘Driftmob’ of skids and spins circling a Cape Town roundabout. 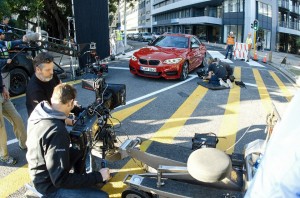 Julian Holland of Partizan was filming a separate production in Cape Town when he was inspired to look into shooting the BMW piece there as well, with help from servicing company Farm Film. The commercial was directed by veteran stunt expert Mic Rodgers, whose recent feature credits include Thor: The Dark World, The Lone Ranger and A Good Day to Die Hard.

“Cape Town in general is a very film-friendly city with an international, big-city look,” Holland explains: “As we shot it almost during their winter season, we even had a bit more freedom with the permits.”

The production team was given permission for a two-day road closure on a roundabout on Heerengracht Street near the Cape Town International Convention Centre. Safety was of course paramount, particularly regarding the crowd of onlookers that needed to look randomly assembled while also being carefully positioned out of harm’s way.

South Africa is a hugely popular international filming location because of its competitive filming incentive, experienced crew base and impressive studio facilities. Recent high-profile brand campaigns have included Ikea Beds, which combined skydiving with aerial wirework in Johannesburg, and VW, which enlisted the help of director Paul WS Anderson for a series of shorts subverting the action genre.

BMW had a viral success in July with its Ultimate Racetrack short. The film appeared to show a stunt driver taking a BMW M4 for a spin on the deck of an aircraft carrier specially converted into a racetrack. Canadian agency Cundari wisely refused to comment on whether or not the spot was real and the commercial has since racked up more than 4.5 million views on YouTube. The Location Guide did some detective work on the spot and you can read our thoughts here.