Agency Spark44 and production company Black Label Productions has filmed a new Jaguar campaign for China with David Beckham. Filming took place in central London and at Goodwood Motor Circuit in southern England, and on Mallorca.

Conceptualised and managed by Spark44, the spot shows Beckham revisiting Jaguar’s history as he indulges in some period track racing before shifting through the decades with a drive on the French Riviera and past the Palace of Westminster in London.

Beckham attended the Goodwood track filming in person and did much of his own driving for the close-up track racing shots. The production team then used green screens and multiple cameras to film footage of him for use elsewhere in the commercial.

“We filmed on Westminster Bridge early on a Bank Holiday morning after four weeks of preparation and negotiations with all the relevant city authorities,” explains Dom Freeman, Executive Producer with Black Label Productions. 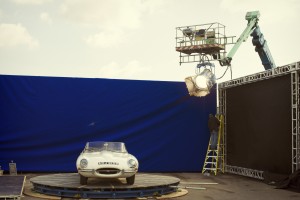 “We wanted the iconic Parliament location and the councils on both sides of the Thames were very helpful. There was plenty of upfront time to make the arrangements, including helicopter permits. We couldn’t do a full road closure, so we were allowing traffic through between takes.”

Mallorca was used as a stand-in for the French Riviera of the 60s, a location that was already known by director Matthew Vaughn.

“The winding roads of the real French Riviera are just not there anymore as they were in the 60s, or there’s just traffic gridlock,” Freeman adds.

Palma Pictures serviced this leg of the shoot, filming on the ground with a Russian Arm and capturing aerials from a helicopter. Local authorities helped arrange road closures on longer stretches.

Comments Dani Sampedro, a Location Manager with Palma Pictures: “The roads selected for the film were the road to Sa Calobra, known for her multitude of curves which go from the top of the mountain all the way down to the sea. This is in fact the road where many pro cycling teams train during the winter months ... [We also filmed on] the road to Formentor, a ten-kilometre road leading to a lighthouse in the most northerly point of the island, with spectacular sea views.”

The David Beckham shoot is just the latest in a series of stylishly-produced campaigns for Jaguar. In 2013 the motoring brand headed to the Atacama Desert in Chile to film the road-movie short Desire, which featured British actor Damian Lewis.