The BBC is set to film new period supernatural drama The Living And The Dead on location in England’s West Country next year. Set in Somerset in 1888, the drama will follow a farmer who investigates paranormal activity in a bid to prove the existence of an afterlife. 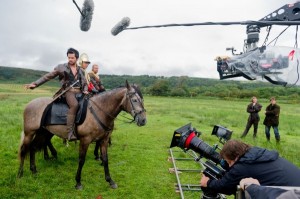 “From the creators of Life On Mars and Ashes To Ashes comes exciting new fantasy series The Living And The Dead, steeped in real history and mythology that will scare the audience and awaken the dead,” said Charlotte Moore, Controller of BBC One.

Added Writer-creators Ashley Pharoah and Matthew Graham: “We are as excited about this show as anything since Life On Mars and Ashes To Ashes – we want it to be moving, tender, sensual… and very, very scary.”

Television production in the UK is increasingly moving west, with filming made more viable by the TV tax credit launched in mid-2013. The Bottle Yard Studios in Bristol are growing in popularity, having hosted major period dramas New Worlds, Wolf Hall and Poldark. Fairy tale drama Galavant will shortly become the first US series to film at the facility.

Bristol is a regular filming location for productions based in nearby Cardiff, such as Doctor Who, as it’s a useful double for London locations. The BBC bases its flagship sci-fi series in the Welsh capital and also shoots its adventure series Atlantis at a retrofitted studio facility in Chepstow.

Major US fantasy drama Da Vinci’s Demons has spent two seasons doubling the Swansea region for Renaissance Italy and recently announced it will be staying in the area for a third series.