Studio Babelsberg has started work on a new back lot set as part of its existing filming facility in Potsdam, near Berlin. The Neue Berliner Straße – or New Berlin Road – is described as a “modular hybrid set” and is an investment of over EUR12 million that will span some 12,000 square metres. 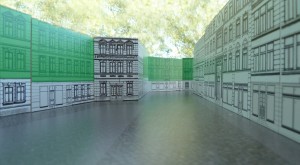 Classical street facades, streets and pavements will be moveable, along with green screens and blue screens for background visual effects, all of which will make the back lot more flexible for filmmakers.

“We are competing with film production hubs throughout the world,” said Studio Babelsberg head Charlie Woebcken: “A permanent exterior set was always an important element in Babelsberg's attractiveness as a location. We will meet the current artistic and technological demands with the Neue Berliner Straße and hope that the new offer will enable us to continue to acquire both German and international TV, advertising and feature film productions.”

Studio Babelsberg has been involved with a series of recent Hollywood productions, including George Clooney’s World War II drama The Monuments Men and Wes Anderson’s period comedy The Grand Budapest Hotel. The studio is currently the executive production company on the remake of cult 90s surfing drama Point Break, which has already filmed on location in Berlin and has green screen studio work scheduled for November.