Crime drama Crossing Lines has used Prague as a production base, doubling the Czech city for locations across Europe. The story follows a fictional crime unit within the International Criminal Court (ICC) in The Hague in the Netherlands, which specialises in solving cross-border cases. 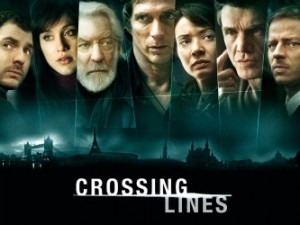 “Most of the series was shot in and around Prague,” explains David Minkowski of service company Stillking Films: “Prague was chosen because it can effectively double so many European capitals and it has a good tax credit, which we obtained.

“As French network TF1 is one of the biggest financiers of the series, they also require us to shoot a certain amount of time in France, so about 20% of the schedule is shot there. We also send visual effects units around to capture establishing shots if needed.”

Filming took place mostly on location, where signage and foreign vehicles were used to turn exterior locations into different European cities. Sets for the ICC, and interiors of trains and helicopters that the characters use as their main modes of transport, were built on stages at Barrandov Studios in Prague.

“The pace is very fast on episodic television and we shoot each episode with a different director in nine days,” Minkowski adds, “so getting scripts and then finding and securing locations in time is a constant pressure.”

The Czech Republic’s 20% filming incentive is a major reason for the country’s continuing international appeal and this year the government has boosted the film fund to the equivalent of USD40 million. Recent high-profile productions have included the BBC’s hit family adventure series The Musketeers, Cold War drama Child 44 and Chinese feature Somewhere Only We Know.

The second series of Crossing Lines will be available on Amazon Instant Video in the next few weeks.