A new series of children’s superhero drama Power Rangers will return to film on location in Auckland and is set to boost the country’s TV industry. Power Rangers Dino Charge will be the highest-profile international TV series to film in New Zealand since the incentive programme was increased. 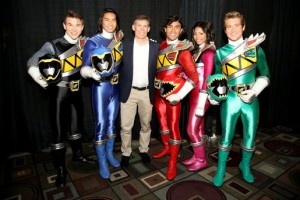 The show has filmed extensively in New Zealand in recent years, but there had been concerns about its future in the country before the filming incentive boost was announced late last year.

Power Rangers Dino Charge will be eligible for the New Zealand Screen Production Grant, which offers a rebate of up to 25% on large international shoots. A New Zealand actor will be part of the main cast.

“We are delighted to be working with Saban Brands and the Power Rangers, and agencies such as Auckland Tourism Events and Economic Development (ATEED) to promote New Zealand’s involvement, particularly New Zealand cast and crew, and messages about our screen industry’s capacity and capability for television production,” said Film New Zealand Chief Executive Gisella Carr.

Added New Zealand Film Commission Chief Executive Dave Gibson: “The new season is particularly important as it is the first time that the production will formally engage directing and writing interns to work alongside the experienced team.

“Having up-and-coming New Zealand talent actively participating in the creative process is something we value highly and forms part of a long-term strategy to develop New Zealand expertise, with an eye to future development of New Zealand IP.”

We are delighted to be working with Saban Brands and the Power Rangers, and agencies such as Auckland Tourism Events and Economic Development to promote New Zealand’s involvement.

The New Zealand Screen Production Grant became active in April and helped secure James Cameron’s Avatar sequels, which will spend at least NZD 500 million in the country as three films shoot back-to-back. New Zealand’s TV industry will also be reassured by the return of the Power Rangers franchise.