Upcoming TV miniseries ANZAC Girls has filmed entirely on location in and around Adelaide in South Australia for a story set during the Gallipoli campaign of World War I. The drama focuses on the New Zealand and Australian nurses who served at Gallipoli and elsewhere on the Western Front. 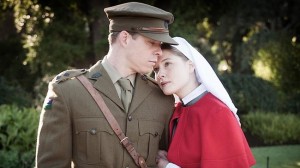 Gallipoli was a major ill-fated wartime campaign in 1915 in which Allied forces attempted to take the Gallipoli peninsula in Western Turkey. The six-part ANZAC Girls has recreated locations including the Greek Islands and Cairo in the Adelaide area, reports Victor Harbor Times.

Cliff-top farmland in Myponga, south of Adelaide, was used to recreate the Greek island of Lemnos as the view offered glimpses of islands in the distance.

“We built the camp on a farmer’s land,” producer Lisa Scott told the outlet: “We needed a spot where you could see land and water. It gave us that land source we were looking for to simulate Lemnos. [The series] was entirely filmed in SA, which we are very proud of. A lot of Adelaide is time-period correct.”

Several high-profile TV dramas and features are in production to mark next year’s centenary of the Gallipoli campaign. Sam Worthington is one of the star names appearing in Deadline Gallipoli, a miniseries also shooting in South Australia telling the story of a group of war correspondents and their experiences during the infamous campaign. The shoot will be filming partly at Adelaide Studios, which offers two stages and is designed for productions with budgets in the AUD 30 million range.