New US series The Quest filmed on location in Austria to find its fantasy setting. The show is a hybrid of fantasy role-play and ‘reality’ drama, and shot mostly at Burg Kreuzenstein, a castle near Vienna. 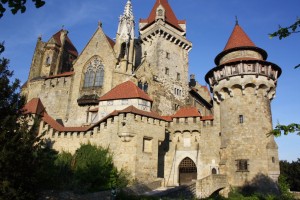 The Quest was developed by a creative team with collective experience on The Lord of the Rings trilogy and The Amazing Race, and was serviced locally by Gebhardt Service Productions. A group of regular contestants – referred to as ‘Paladins’ in the show’s parlance – are brought to the fantasy world of ‘Everealm’ where they compete in activities like archery and jousting, and must eventually defeat an evil overlord.

The Burg Kreuzenstein site dates back to the medieval period but the castle was largely destroyed in the mid-17th Century. It was reconstructed from 1874 with parts sourced from across Europe to recreate a hybrid version of the medieval castle. As a result, the existing building dates back to a variety of different eras in European history.

“The castle is a modern, very film-friendly location and has a huge courtyard that was very useful for set construction on The Quest,” says Arie Bohrer of Location Austria: “Furniture was moved out and the interiors changed for the shoot, and the castle was closed to the public for a month. Unfortunately the show wasn’t eligible for any financial support because it was a non-scripted ‘reality’ production.”

Burg Kreuzenstein dates back to the medieval period but the castle was largely destroyed in the mid-17th Century.

Austria offers film funding on both federal and regional levels, including the Film Location Austria initiative that offers a 25% grant to qualifying productions.

Historical fantasy dramas have become big business in recent years, driven by the massive continuing success of Game of Thrones and the resurgence of Tolkien on the big screen with Peter Jackson’s Hobbit trilogy.