Oscar-winner Adrien Brody has started filming the historical feature Emperor on location near Prague. The Czech Republic is currently a popular place for period dramas, with the BBC also working in the region for a new series of The Musketeers. 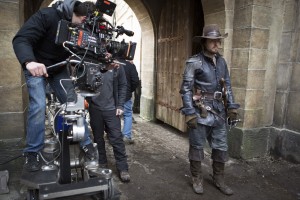 Emperor starts in the early 16th Century and follows the reign of Europe's Holy Roman Emperor Charles V and the young woman who blames him for the death of her father.

The production is expected to spend about USD 15 million in the Czech Republic and will get a filming incentive payment of around USD 3.5 million. The shoot will be serviced locally by Film United.

Český Krumlov near the Austrian border will be transformed into a German market town for the production. The city was previously used as a filming location for the 2013 Guinness commercial The Clock.

The Czech Republic’s 20% filming incentive – with a fund boosted to around USD 40 million for this year – means the country remains a popular filming location in Eastern Europe, partly because its historic architecture makes it an easy double for other parts of the continent.

Crime drama Crossing Lines uses Prague as a production base and doubles the city for multiple European locations, including The Hague in the Netherlands. The filming incentive has been a major reason for the show’s presence in Czech Republic over two seasons.

The Musketeers doubles Prague and its surrounds for 17th Century Paris, again partly because of the abundance of historic architecture that has made the period setting more practical to set up.