Crime drama Hinterland filming on location in Aberystwyth in Wales

Welsh crime drama Hinterland is filming its second series on location in the Aberystwyth region of western Wales. The show’s dark tone is inspired by popular Scandinavian dramas like The Killing and it is filmed in both English and Welsh. 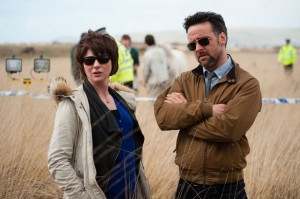 “The interesting thing about being back in Aberystwyth is that, in a good way, everyone now has an opinion in the town, which is lovely - it’s a sign that people are watching the programme,” the drama’s co-creator Ed Talfan told WalesOnline.

“Some people think it would great for us to shoot a scene in location X, Y or Z, whether it’s the lifeboat station or the pub around the corner. People are always suggesting can we have a death at their business. We’ve become locals in certain establishments - it’s a very easy town to operate in.”

Hinterland was praised over the summer by the Welsh government for bringing more European Union funding to Wales. About 15% of the show’s budget comes from Europe, which helps make production possible.

Wales remains a hugely popular filming location with international appeal. Production is generally focussed on Cardiff where the BBC bases the hit sci-fi drama Doctor Who. Pinewood Studios recently announced plans to develop a small-scale TV facility in Cardiff in a deal that has also involved setting up a Media Investment Budget to boost feature production in the country.

As a measure of Wales’ appeal to the US industry, David S Goyer’s fantasy TV drama Da Vinci’s Demons has become a long-term resident and is set to film a third season on location in and around Swansea, doubling the area for Renaissance-era Italy.