DreamWorks is preparing to shoot historical drama The Light Between Oceans on location in New Zealand. The movie will feature Michael Fassbender and Rachel Weisz as a couple on a remote Australian island after World War I who adopt an infant they find in a washed-up boat. 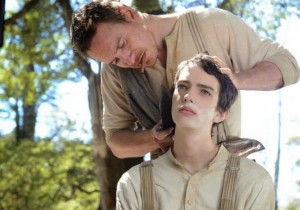 Preparations in the Marlborough region of the country around Blenheim on New Zealand’s South Island have included building a temporary jetty set.

“Shooting period films are always tricky as we have to make sure there are no signs in our immediate environment that indicate anything but the 1920s, which can be a tough job at times,” Supervising Location Manager Jared Connon told the Marlborough Express.

“Across the board the support and willingness to ensure a successful film shoot takes place has been a fantastic asset which the region should be immensely proud of.”

Fassbender has previously filmed in the Canterbury region of New Zealand for the period feature Slow West (above) which doubled the area for Colorado.

New Zealand’s international filmmaking profile has been given a boost this year with an increase to the country’s filming incentive programme, a move that was instrumental in securing James Cameron’s big-budget Avatar sequels. High-profile children’s drama series Power Rangers will also be returning to its Auckland filming locations.

Jared Connon has worked extensively with filmmaker Peter Jackson and worked on both The Lord of the Rings and Hobbit trilogies. The Hobbit films have also helped boost New Zealand’s film tourism industry and the third entry, The Hobbit: The Battle of Five Armies opens in December.

To read The Location Guide’s interview with Connonm about filming The Hobbit, click here.