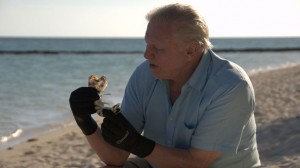 Specialist macro lenses will be used to film the smallest organisms that make the Reef their home and satellite scanning will reveal the full expanse of coral off the Queensland coast.

“People say to me, 'what was the most magical thing you ever saw in your life?’... and I always say without a word of exaggeration, ‘the first time I was lucky enough to scuba dive on the Great Barrier Reef’,” Attenborough said.

“As I entered the water I remember suddenly seeing these amazing multi-coloured species living in communities… just astounding and unforgettable beauty. So I’m very excited to be returning to the reef with all the latest technology and science to see one of the most important places on the planet in a whole new way.”

Added Anthony Geffen, the series’ producer and head of Atlantic Productions: “Great Barrier Reef continues to build on the storytelling techniques and unique technologies that we have been developing during our partnership over the last six years.

“We will be using the latest scientific research and capturing the Reef using super-high speed cameras, new macro lenses, time-lapse and many other techniques to reveal and visualise the Reef in completely new ways.”

The series will mark the tenth that Atlantic Productions has worked on with Attenborough.