Black Diamond filmed on location on a glacier in Verbier, Switzerland, for a new commercial for the Nissan Juke. The spot shows Olympic medallist snowboarder Jenny Jones showing off her skills on a mountainside of multicoloured snow and through an urban snow park. 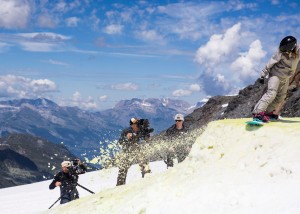 Verbier was chosen as the filming location because the resort offered a 3,300-metre glacier with year-round snow cover, necessary for a shoot at the height of the European summer.

A biodegradable food-based dye was used to create the multicoloured snow patches that Jones was to board over, and which represents the customisable colour schemes available for the Nissan Juke. The dye was applied by skilled skiers spraying the mixture from special backpacks as they descended ahead of the shoot.

The urban snow park was also created on the glacier and then snow had to be taken to the city for the urban shots.

“We transported snow from the mountain in big, refrigerated vans, then laid it down in various locations for Jenny to board through,” explains Poppy Manning, Head of Broadcast for agency TBWA.

“This was a real challenge given the weather conditions we faced, as well as the size of areas we were shooting in. Weather was a huge issue that we faced on the shoot, as it was the worst summer Verbier had seen for 50 years. 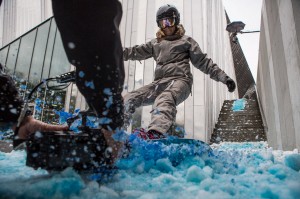 “We delayed the shoot originally by four days as the weather forecast didn’t work for the conditions we needed. We ended up shooting in the urban valley in very overcast weather, so were only able to achieve 50% of our shot list initially. Plus there was a constant white-out for the week, which stopped us filming at the summit to shoot all of the slope-style boarding scenes.”

In the end the weather problems meant the team had to come back to the location a week later when the conditions were better.

Verbier itself lies in the south-west corner of Switzerland near the French and Italian borders. The Italian Alps are a popular filming location and convenience of access makes them a useful double for notorious peaks like Everest and K2.