Boomtown Productions, based in the United Arab Emirates, has filmed across Sri Lanka for a new series of promotional shorts for Sri Lanka Tourism. Designed to boost high-end Arab visits, the films show holidaymakers exploring scenic parts of the country. 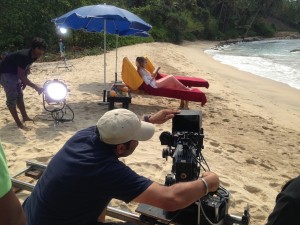 The production team travelled twice around the country, spending a week scouting locations and then doing the journey again for the actual shoot. Given that it was a tourism shoot, the team had an easier time getting access to many of the locations.

“We did a pencil drawing on locations required for the story and then finalised what we needed to scout,” explains Priyanga Kumarasiri, a producer with service company Crew For Shoots: “Then the Boomtown crew came down for a recce and we started visiting each location to see what was best for the story.”

The week-long scout also helped the team work out the most efficient way to cover all the necessary locations during the shoot week. An Arri Alexa camera and a remote drone for aerial filming – from Helicam India – were both imported.

“We worked out a travel day between each shoot day and started filming in Sigiriya first and then moved to Nuwara Eliya for tea estates,” Kumarasiri says.

"We travelled to the south and filmed the next day for the family on the beach scene," Kumarasiri continues: "The next day we again shot with stilt fisherman and at three other hotels. At the end we covered all the locations and the shots that were required by the director.”

Additional filming locations included the Pinnawala elephant orphanage and the Dutch fort town of Galle in the south-west of the island.

Adds Molly Martin of Boomtown: “The crew were professional and helpful and their knowledge of all these stunning tourist destinations was great – pleasure to work with. We also really enjoyed shooting in Sri Lanka, which offers an amazing variety of locations on one island.”